awesome.. my size and favourite color. How did you find it? ( a silver ringle would look good there)

well I would say by fate!

I was two weeks ago work-related in Switzerland. A colleague came one morning with this bike to work, he had no idea of FAT Chance and complained about the bike and said it was for him a lot of sports and uncomfortable and he would need some suspension.
Well what should I say, the opportunity was unique, so I have made him a proposal that he couldn't refuse

I let the bike build apart in a shop in Zürich and took home only the frameset. It's in top condition.

..but there is something special in this YO eddy, you see that?

Hi Nader,
congratulations to this stroke of luck. Look here my Yo Eddy in glossy black. Back then with a massive Syncros stem. Meanwhile, I have replaced the Shimano crank for a Syncros crank. The Syncros stem was replaced by a black salsa. I'm curious about your built. The Crank Bros cranks looks ever promising

Helmut, ich grüße dich aus dem Norden ...and of course I know your beautiful black Yo Eddy.
I would build mine with silver & black parts of Shimano only as hubs could I imagine the big white Industries Phantoms 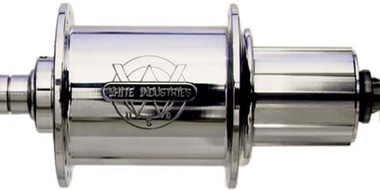 nader said:
..but there is something special in this YO eddy, you see that?
Click to expand...

...would that be the Cooks Bros Cranks?

The bike is geourgeous! It must be about a '97? I have a glossy black '98 M/L that is my everyday rider; the only difference is mine is much more beat up but has the rear brake running down the non-drive side and no brake bridge (set up for V-brakes). :beer:

jonsonneborn said:
...would that be the Cooks Bros Cranks?
..
Click to expand...

no, not the Cook Bros! the special something is just the fork, it's a big one inch.
I always thought the YO fork would be nicer but the BOI is really even more beautiful

..not a pretty seatpost but the end justifies the means

BOI has smaller diameter legs and it's taller. Your Yo is corrected for 2in susp mag 21 and manitous. Both BOI and Yo have a different rake than the usual unicrown 26in mtb fork.

colker said:
BOI has smaller diameter legs and it's taller...
Click to expand...

exactly and thus the whole bike looks a lot filigree ...I like it
F

This is turning out QUITE nice, I love the looks of this build. So lucky to stumble across that black Yo in such pristine condition. Keep the progress photos coming...

The best days of the year are over , now I am happy just about build of my glossy ..I will continue with black and silver..

and the best of Ritchey

..and the best of shimano

the right front derailleur and cantis are coming
C

Correct vintage would be xt 737 ... but i like myself your derr. better.
otoh i don't get ultra low bars on Fats. I just find i can throw them around better when i raise my 10º stems.

edit: mavic is the nec plus ultra.
T

nice frame and fork...not so in love with your part choices -- but it's not mine, and my opinion really doesn't matter.

I bet you it will ride stellar either way

there's always a temptation to put old shimano stuff on...(mainly because it works and is affordable, and easy to get)

The White industry hubs are too cool too.

I think you should sell that kick a$$ early 90s crank to me...nudge nudge wink wink
C

tvcreative said:
nice frame and fork...not so in love with your part choices -- but it's not mine, and my opinion really doesn't matter.

I bet you it will ride stellar either way

there's always a temptation to put old shimano stuff on...(mainly because it works and is affordable, and easy to get)

The White industry hubs are too cool too.
Click to expand...