Were XL Fat frames made in small quantities?

I can find 18” frames for sale all over the internet and even saw a couple locally. But finding one for someone with a 34” cycling inseam appears much more of a challenge. Does anyone know if the basketball player sized frames were made in far smaller quantities than the mediums?
S

I would say for sure. 34 inseam is not crazy long. A M/L FAT frame fits 6-6’2” and a L 6’2” upwards. XLs typically 6’4” + FATs always tended to have longer top tubes, so depending on the year and whether its sus corrected or not guys over 6ft typically can get away with m/l or L frames.
J

I think I’m an oddity because I ride a much larger frame than people expect. I hit the maximum seatpost extension on an 19” frame before I get comfortable.
S

You can get Syncros posts in 425mm 29.4mm if you need the extra height. I ride m/l in the later Saratoga specs & earlier Somerville L FATs.

The largest FAT frames produced were the 23" Fats and Wickeds in the late 80's and early 90's while I was there. These were produced in very small numbers compared to the smaller frames. I'm not aware of anything larger produced and it would have been custom. The 23's were sized for riders up to 6'-6" but I don't think I've ever seen one for sale here or ebay. I would say that there were less than 50 produced overall of both models combined in the eight years I worked there, but that's a guess at best. I have no knowledge of what was built after Somerville closed.

The Yo Eddy was built in Large which was a bit bigger than the 21" Wickeds and Fats but has the sloping top tube like all Yo's have.

Thank you for the information Scott.
B 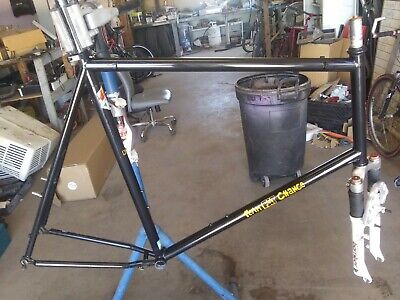 Marzocchi Bomber Z2 suspension fork is included, it has a leaky oil seal, seems to function otherwise. Looks to have been manufactured in 1997 in NY when Chris was working with Ben Serotta.
www.ebay.com
J

I didn’t think Shaq ever had a Fat!

Impressive! That thing is gigantic