Having owned and ridden most of the early 90s Ti frames, Hei Hei, Marin Ti, Sandviks, Dean, Litespeeds, Merlins etc built with plain gauge Ti tubing, for comparison this uses oversize custom spec ‘hand machined’ butted tubing which is much stiffer in the BB and other areas and completely stable on fast descents. Other Ti bikes could be scary with bad frame wobble at speed. Climbing was also sketchy with very flexy BBs under load, breaking tyre traction etc. This is still a very comfortable ride with natural Ti shock adsorption and the just the prettiest frame I have ever seen, a flawless work of art.

Im forever grateful to Cog member Zonq for passing this onto me. See the bare frame pics here. Shame I could not afford it in my youth but it’s a keeper now. 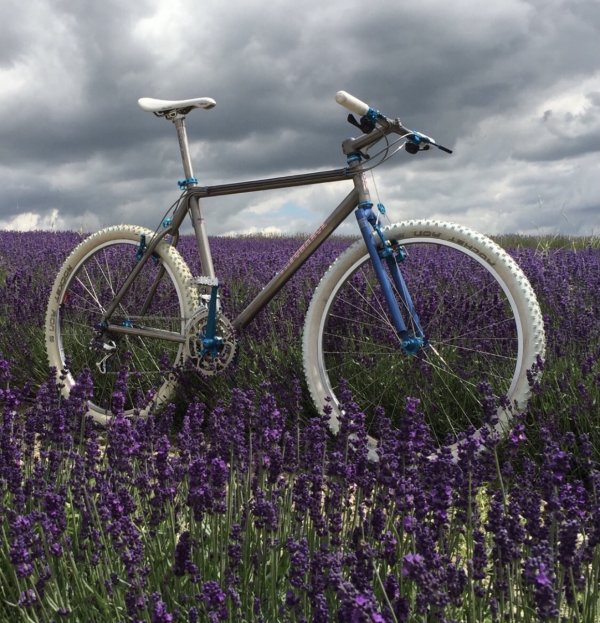 The early FAT Ti’s were revolutionary at the time for their design, stiffness and handling. Even today the Titanium frame technology is no better, they just have better brakes.

Love it! Where did you get the decals?
Scott
S

I-ROBOT said:
Love it! Where did you get the decals?
Scott
Click to expand...

I badgered Gil @ Retrodecals to make the first set

I have an original FATLANTA decal set but I needed the immortal word Titanium to match the set. I keep meaning to put them on other FATs but then I like originality too

Looks great Stinger, it’s really great to see it done up so well too. & the Fatlanta decals turned out great! I tried to do that when I had it but got hung up trying to get velocals to do the “Titanium” side.

…the hunt for a M/L continues…
S

Gil@Retrodecals is a master of his craft

You found white Tomac Attacks! I have been watching for a pair of those for ages, & thought about just molding my own. I knew they existed.
S

zonq said:
You found white Tomac Attacks! I have been watching for a pair of those for ages, & thought about just molding my own. I knew they existed.
Click to expand...

They only seemed to exist either in Japan or Germany

I imported them from the latter. White isn't practical for a mountainbike but dayum it sure looks good in the sunshine